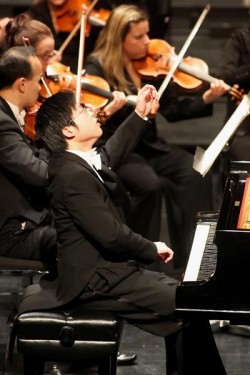 Yu's body swayed to the music his fingers made on the theatre's Steinway grand during Chopin's monster three-part piano Concerto No. 2 in F Minor.

VSO faithful seemed to savour every sound of impeccable playing and memory work by the Canadian ivory upstart who sure earned his two standing ovations.

Yu was backed by jocular guest maestro Jean-Francois Rivest who led the VSO through Chopin's work that swung from pretty and dainty to emotional and calm.

From melancholy to exhilarating to lithe and familiar, the VSO was spot on during this moving Faure piece.

His debut visit with Yu and the orchestra was a prime example of classical music's addictive quality steeped in relaxing reinvigoration.